Alert Coronavirus (COVID-19): Information about City services and links to resources... Read On...

The process to develop regulations for cannabis businesses was set in motion when the San Bruno City Council included the development of such regulations as a part of the Fiscal Year 2021-22 Strategic Initiatives. The City hired a consultant to lead the process and work on the effort started shortly thereafter.  On February 8, 2022, the City Council held a Study Session to consider options for commercial cannabis operations in the city. At the conclusion of the Study Session, City Council directed staff to proceed with preparation of draft Municipal Code amendments and related procedures that would provide for up to 3 commercial cannabis operations, consisting of any combination of cannabis retailers in zoning districts in the San Bruno downtown area, along portions of San Bruno Avenue and El Camino Real, and at The Shops at Tanforan, and for distribution uses in the M-1 (light industrial) Zone north of Interstate I-380.

At public hearings on July 19, 2022 and August 16, 2022, the Planning Commission discussed and made recommendations to amend the Municipal Code Article III (Zoning) to allow for commercial cannabis operations in certain parts of San Bruno as shown on the attached map. The Planning Commission also recommended additions to the map to include Bayhill Shopping Center and Towne Center. 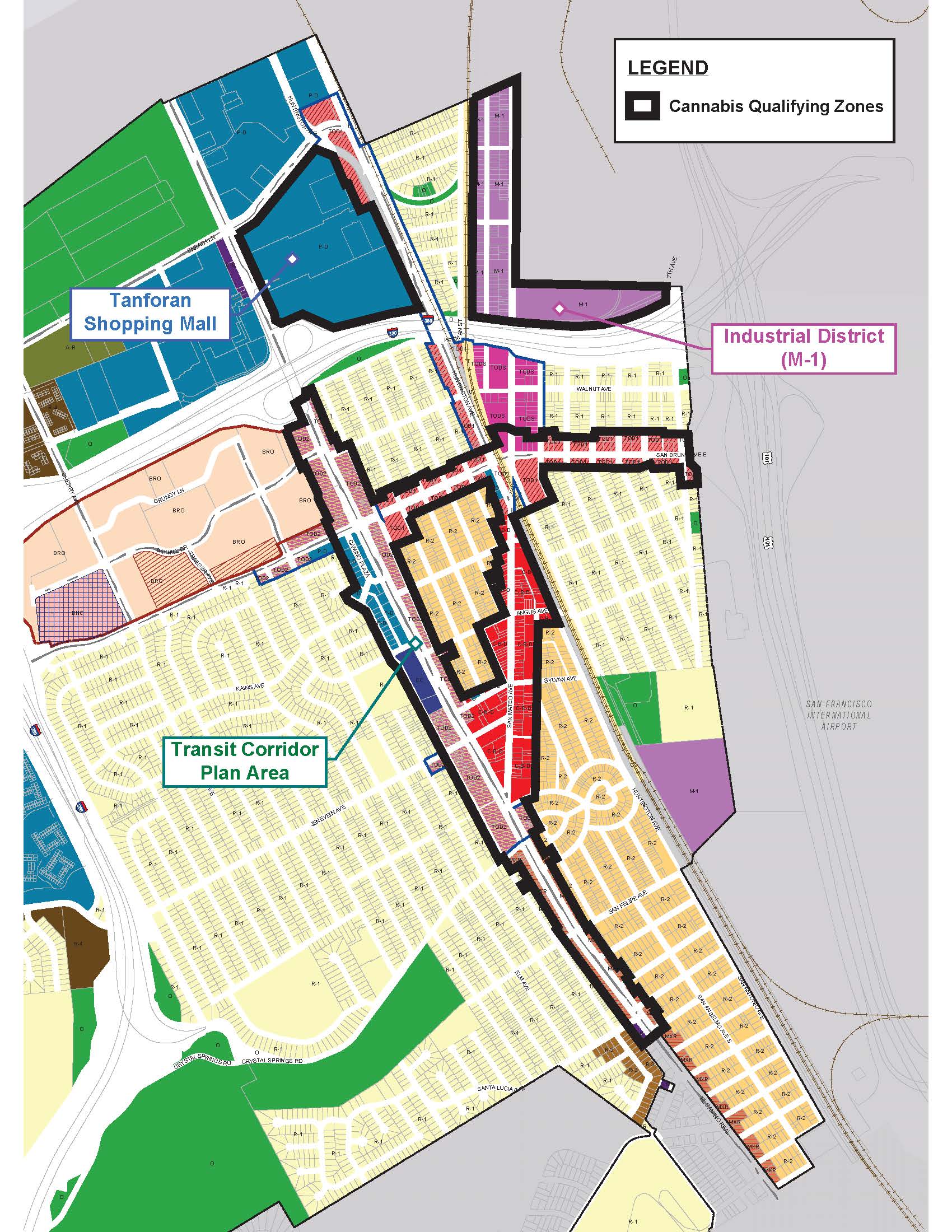 Commercial cannabis uses cannot be located within 600 feet of what would be considered to be sensitive use such as schools and parks.  The sensitive use map is currently in the process of being updated based on the City Council direction given on September 27, 2022.

Once adopted, the cannabis ordinance would do the following:
There would be no other types of commercial cannabis operations permitted; all of these uses are currently and would continue to be prohibited by the City of San Bruno:
The San Bruno City Council will consider adoption of the ordinances at their October 11, 2022 City Council meeting.  The meeting details will be available 72 hours before the meeting, on the San Bruno Agenda Center.
Agenda Center
Library
Building
Public Safety
CityNet Services
Recreation
General Contact
Utility Billing
Government Websites by CivicPlus®
[]